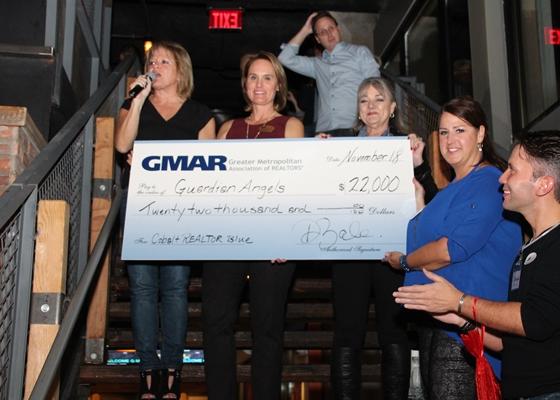 The Greater Metropolitan Association of REALTORS® (GMAR), the top local association of REALTORS® in Michigan, held its second annual “Gives Thanks” party on November 18 at Punch Bowl Social Detroit. The party celebrated and honored servicemen and women, veterans, and the entire GMAR membership. This was the second fundraiser of the year to raise enough money to train a medical service dog to assist a Michigan military veteran through Guardian Angels Medical Service Dogs.

The dog was chosen, Cobalt Realtor® Blue and the price was set at $22,000. Considering in years past, GMAR had only raised around $6,000 for their charities, it was a lofty goal. At the annual Golf Outing in September, GMAR raised $6,000. Over 300 members, friends, and family members turned out for the party. Even with all the ticket sales and raffle prizes, it appeared they wouldn’t make it. Then, one real estate broker anteed up $1,000 and challenged his peers to do the same. Another gave, then another, and another. Before the night was over, the tally was in. GMAR raised exactly $22,000!

GMAR President Debbie Zalewski said, “I couldn’t be more proud to see so many of my peers and friends stepping up to save the life of a Michigan veteran.” Guardian Angels Medical Service Dogs Founder and CEO Carol Borden informed attendants that 22 vets who have PTSD succeed in taking their life each day and that 90% of married vets are suffering from PTSD divorce. She said that both rates drop to ZERO when paired with a Guardian Angels Medical Service Dog.

The Association is very proud of its compassionate members for volunteering their time to put on such a wildly successful event and raise the most money GMAR has ever donated to charity in a year. REALTORS® truly do make a difference in the communities they serve in more ways than one might imagine.